Daybreak Outdoors partners with Vanguard® engines and Gator-Tail motors to show their followers the power in the product.

While Gator-Tail motors are equipped to power boats for all sorts of activities, one area where these motors shine is in waterfowl hunting. Avid bird hunter Brandon Martin, the owner, founder and videographer for the YouTube hunting show Daybreak Outdoors, can definitely attest to that.

If you’re a hunter or fan of the sport, you might have heard of Daybreak Outdoors, which follows a group of waterfowlers and highlights the sport of hunting “anything with feathers”. The show is currently in its fourth season and was founded by Martin three years ago.

Martin started Daybreak Outdoors to simply capture his and his friend’s hunting adventures, but they quickly found that there was enough interest to go further.

“We posted our first episode and surprisingly, we got a lot of attention and we realized at that point, how cool and relatable it was to other duck hunters and we were doing it all out of our backyard,” Martin says.

One of the keys to their success was the good group of guys, and the advice and “how-tos” they were sharing.

“Like with any hunting show, in order to stick out, you have to have something that differentiates you from the others,” Martin says. “That’s one of the reasons I started the show, because the group of guys that I have with me and that I film all have great personalities. Everybody’s really good at giving tips and showing how to duck hunt.”

They soon realized that with the advice they were giving and the following they were building, that partnering up with brands they used and trusted would be a great way to continue doing what they loved while helping their audience in their own waterfowl hunting. 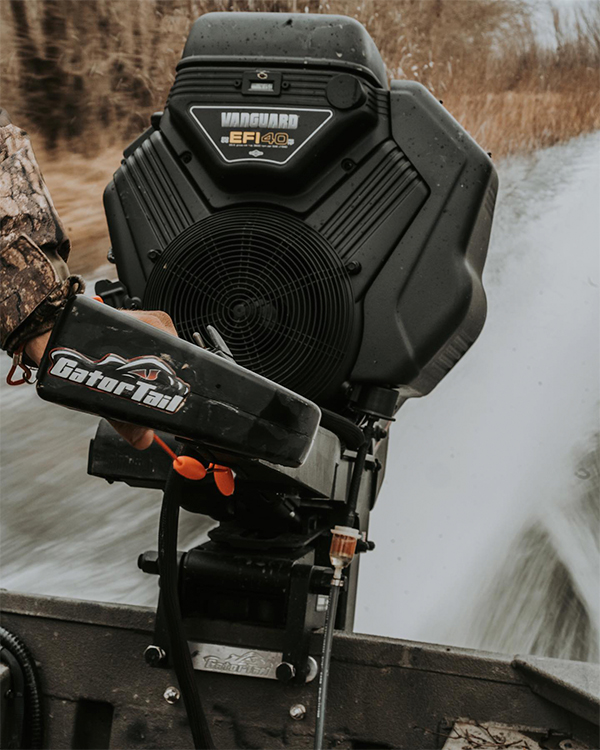 One of the partnerships that Daybreak Outdoors formed was with Vanguard and Gator-Tail. For Martin it was an obvious choice: he’s been a longtime fan of the Gator-Tail products powered by Vanguard and uses them frequently.

“We’ve been utilizing Gator-Tail motors for three years now,” says Martin. “There’s a couple of other competitors out there and I’ve honestly used pretty much every one of them before I got the chance to use a Gator-Tail motor, so I can tell you it’s definitely a superb product.”

Daybreak Outdoors only has a couple partners and around five or six sponsors including Vanguard engines, but that’s the way they like it. From the beginning, Martin was set on only promoting or working with products that they used and trusted.

“Even before we started doing the show, we truthfully were using those products,” says Martin. “It’s something that we already believed in. We’re just lucky enough to be able to have that relationship with those partners.”

With all the paid and promotional content shared by creators today, Daybreak Outdoors is careful to make sure that anything that they might suggest or promote to their audience is something those folks might actually use. Trust is key.

For Daybreak Outdoors, the product partnership comes naturally. The team uses Vanguard engines and Gator-Tail motors on their boats in almost every video, so the audience can see first-hand the engine in action and how well it holds up.

“A lot of our videos and any of the videos that we post that contain a mud motor, you're going to see the Vanguard engine on there,” says Martin.

“We use them every single day during duck season, so there's a lot of content of the Vanguard motor being in use while we're filming. Anytime we're headed to the blind or to scout, you'll more than likely see a Vanguard 40 HP* roaring in the video, being loud, showing it running all that kind of stuff. It definitely plays an important role in the way we create content; because you're going to see Vanguard anytime we're in the boat.”

Engine and Motors Made Well

“When we got the 40 HP*, we were just absolutely blown away,” says Martin. “We also liked that Vanguard comes with a three-year warranty**. It shows you that they stick behind their motors.”

The Vanguard 40 HP* marine engine, along with the other Vanguard V-Twin engines, are designed with debris and air management features for durability and an efficient oil system that increases the life of the engine and oil change intervals. They also come with a three-year commercial limited warranty**, to give an extra guarantee of product protection.

Gator-Tail and Briggs & Stratton have had a strong partnership for years, working together to make motors like the GTR40XD-EFI motor for folks like Martin to rely on for their sport.

“As long as we've been using Gator-Tail, it's had the Vanguard engine on it,” says Martin. “One of the things that definitely sticks out to us is how much power Vanguard engines have as opposed to competitors. Not many times can you load up five guys in a boat full of gear, dogs, decoys, all that kind of stuff and still plane off.”

The success of the partnership between the two brands is also evident to end users and advocates of the products, like Martin. Not only does he value the partnership he has with them, but he can see the value that is created by Vanguard and Gator-Tail working together.

“I think that Vanguard engines are a perfect fit for Gator-Tail because both believe in outdoorsmen and share the same vision and purpose,” says Martin. “Gator-Tail doesn't cut any corners when it comes to making a machine that will go through practically anything, so everything they make and every option they put on the engine after the motor's sent to them, makes so much sense to a waterfowler.”

With the next season of Daybreak Outdoors in the works and the new additions to the Briggs & Stratton power products, it’s safe to say that the partnership has a strong future.

“It seems like Vanguard and Gator-Tail are always adding something new every year, because these two companies together, they make a product that sticks out far from the competition,” says Martin. “At Daybreak, we are absolutely blessed to be able to use it every single day, so we're excited to see what the future holds and we can't wait to be a proud partner of both Vanguard and Gator-Tail.”