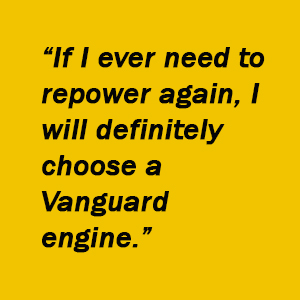 Not many people get to stand on a church floor they built. For Jason DeYoung, this is just another perk of being a general contractor and home builder.

“Our church motto is generation to generation,” said DeYoung. “Now, I come in with my son and daughter and show them the concrete I poured for the floor. Hopefully, someday their kids will be able to say, ‘Grandpa poured all this.’”

25 years ago, DeYoung didn’t know he would be standing on his own handiwork when he attended church. Living in the same square mile in Demotte, Indiana his entire life, he grew up watching his father work as a general contractor for 47 years. After helping on job sites throughout his childhood, Young decided to begin his own contracting company, Jason DeYoung Dream Home Builders.

“I build custom homes, but I also specialize in concrete. With my six other employees, we pour around 4,000 yards flat work,” said DeYoung.

Using his dad as a business resource (and sometimes an extra hand when times become busy), DeYoung continues to expand his contracting and concrete company. He hopes someday his 14-year-old son will take over the family business.

“This is the first summer he’s worked for me, and he’s really taken an interest to it. I hope he works with the company when he’s older,” said DeYoung.

When DeYoung began experiencing issues with the Honda engines in his compactors, he knew just the man to go to. Tim Gross, owner of repair shop Tim’s Bonanza Service and YouTube personality Taryl Dactyl, immediately knew what to do.

Gross and DeYoung’s relationship dates back to when Gross first moved to the Demotte area.

“He got ahold of me, and I built him a house. Several years later, he started his small engine repair shop, and I began taking all my equipment over to him. We’ve just remained friends,” said DeYoung.

When DeYoung’s engine began smoking and having trouble starting, he looked to Gross for guidance. Upon Gross’s suggestion, he replaced his Honda engine with a new Vanguard® 200 single-cylinder engine.

“We took it right out in the dust and dirt and snow and rain, and so far, it has not missed a beat,” he said.

Besides performing well in all weather, DeYoung has enjoyed several other benefits of the Vanguard 200 engine. “It has a quick start, which saves us from waiting 15 minutes for the machine to warm up. This prevents downtime and helps younger employees easily learn how to operate the equipment,” said DeYoung.

Working in a dry, sandy climate comes with its unique challenges, but DeYoung has experienced benefits in this area as well. “I really appreciate the cyclonic air filtration system,” he said. “With our past engines, we would have to stop every 20 minutes to clean out the motor. With the 200, it hasn’t stopped on us once.”

From reliability in all climates, quick start times, self-cleaning capabilities and more – the 200 continues to exceed DeYoung’s expectations and boost his company’s efficiency.

“I haven’t had to change the oil in the engine once since I’ve gotten it. Even the vibrations in the handle of the machine have gone down since we switched to Vanguard,” said DeYoung. “If I ever need to repower again, I will definitely choose a Vanguard engine. I’ve been so impressed with it.”

From creating a legacy that he can literally stand on at the local church, to recommending the highest quality engine for the job – DeYoung hopes to keep the legacy of generational wisdom alive for his son.